2019 is a very good year for my Marvel Comics fandom. Venom by Donny Cates is pretty awsome, Secret Empire is groundbreaking (i’m looking forward to my Secret Empire special) and The Amazing Spider-Man by Nick Spencer is awsome!

The Immortal Hulk is also a very good series and makes the Hulk more interesting then ever before!

Facts about the comic

Previously at The Immortal Hulk …

Bruce Banner is dead. He was dead. Now he is back among the living, but he is alone with the monster. When Bruce is shot, he dies but the monster remains alive and the night belongs to the Hulk, who has changed and is again a massive threat. Bruce is alone and the Hulk lurks in the shadows ..

With this cryptic description, the first Hulk comic is best summarized, as it is primarily about the relationship between man and monster. The story is complemented by an appearance by Alpha Flight member Sasquatch (Walter Langowski).

After his fight with his former friend Sasquatch, at the end of which the Hulk absorbed the energy of his monstrous opponent, the Hulk and Bruce are completely alone. Hunted by Alpha Flight, the Avengers, and the U.S. Military Bruce / Hulk goes on an odyssey to the place where the Hulk was born.

However, the unequal duo is haunted by a shadow from the past that could pose a danger of unknown magnitude to the world and evoke hell itself …

The second volume of The Immortal Hulk is a pretty good comic with a interesting story and many strong picture. There is more action as in volume one but thats okay because next to the action we also a great horror atmosphere which fits perfect to this „new“ Hulk. 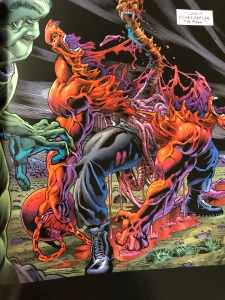 Also in the last issues of the paperback the comic turns from action-superhero stuff to a kind of horror graphic novel and that is very awsome.

But except of strong pictures and many action the comic shows us a ghost from Bruce Banners past who can posses gamma beings like Hulk or Sasquatch. This makes the storyline of Hulk much more interessting and it refreshing to get a story that reminds me to a DC comic.

All in all, I have nothing to praise for The Immortal Hulk Vol. 2. The story is exciting as well as the drawing style convince.

Add to that a refreshing horror atmosphere, as they already had Volume 1. I forgive for The Immortal Hulk Vol. 2: The Green Door the rating worth reading!

We read us in the next post. Have a good read!